Gold can be obtained in a variety of ways:

Players then use gold to purchase equipment upgrades and enhancements, consumables such as potions, components for crafting recipes, mounts, pets, and many other items.

Other forms of currency do exist in World of Warcraft, such as dungeon emblems or marks of honor. However, these items are soulbound, and cannot be transferred to another player character. Therefore, gold is what drives the economy of the World of Warcraft unverse.

Gold can be freely traded between any character of the same faction on the same realm. Gold can be transferred directly through the trade interface or through the in-game mail system.

Gold can be transferred between characters of different factions on the same realm through sales on the cross-faction auction house. Players who have characters in both factions on a realm use this method to transfer gold between their characters. 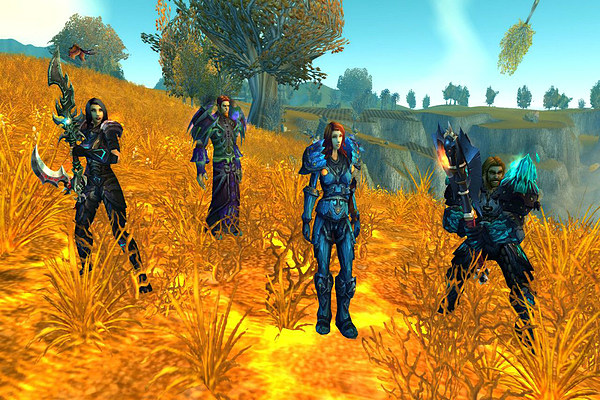 Gold can also be transferred between realms when a character is transferred from one realm to another, but this is not generally done solely for gold transfer because of the costs associated with realm transfer.

The practice of “gold buying” has existed in every MMORPG to date, and World of Warcraft is no exception. Gold buying is the act of purchasing a set amount of gold from another player for a set amount of real currency, such as 1,000 in-game gold for $10USD. This practice violates the terms of service for the game, and both buyer and seller can have their accounts suspended for gold buying.

Gold buying on a small scale may not impact realm economies much, but large scale “gold farming” operations do. Gold sellers employ workers to repeatedly “farm” the realm for lucrative materials, monster spawns, and other drops that can be redeemed for large amounts of gold. The gold sellers “harvest” this gold from the workers and sell the gold to buyers for actual currency. By camping these in-game areas, farmers disrupt play for legitimate player characters. Over time, large influxes of currency into the economy leads to inflation as well.

Like any economy, World of Warcraft’s in-game economy is based on it’s currency: in this case, gold. Gold allows players to complete a variety of transactions, but, like the real world, the potential for abuse exists.

How to Farm Gold in World of Warcraft

World of Warcraft farming does not, as new players might think, refer to one of the professions characters can learn. Instead, farming refers to gathering large amounts of a particular item. Not surprisingly, gold farming is the most popular example of farming.

Gold farming is also known as gold grinding, although grinding generally refers to killing the same monsters over and over again as part of a power leveling strategy (killing monsters that generate high experience. Grinding and farming often go hand-in-hand—if a player spends time power leveling, he or she might as well gather gold and items at the same time. Players can also grind Honor Points and faction reputation.

How to farm gold in World of Warcraft

Every player has a favorite farming method. Generally speaking, gold grinding tips fall into three categories—killing, gathering, and Auction House sales. (There’s also begging, but nothing turns off other players like a Warcraft toon begging for gold).

Gold grinding that focuses on killing monsters is self-explanatory. Players find a monster or humanoid type that drops decent amounts of loot and they kill that type of monster repeatedly.

Some gold farmers combine their gold grinding activity with power leveling, targeting high-level monsters for maximum experience. Another strategy is to target lower level monsters with fast respawn rates (how quickly the game replaces a dead monster with a new one). Lower level monsters can be killed faster, so in theory the player can farm faster.

A third option, as players rise in level, is to enter low level dungeons alone and slaughter the inhabitants. Along the way the player gathers rare items that can be sold in the auction houses.

The “gathering” professions are consistent gold-makers in WoW. Herbalism, skinning, and mining provide raw materials that players need for professions such as alchemy, leatherworking and engineering.

Skinning is very well-suited for gold grinding, as leather is needed for engineering, tailoring, and blacksmithing as well as leatherworking. A stack of twenty leathers will usually sell well to other players. Mined materials are also in demand, but as skinnable beasts are more common than mining nodes skinning is generally preferred for gold farming.

Speculating at the Auction House

Buying and selling in World of Warcraft’s auction houses is one of the most complex gold grinding strategies, but a skilled player can generate significant amounts of gold by buying items at low cost and selling them again for a profit. Auction house speculating is a game in itself for some players, although it does require a form understanding of the WoW realm’s economy.

WoW players are inevitably exposed to in-game spam from “professional” gold sellers who offer Warcraft gold for real cash. Some players see gold sellers as a shortcut to easy riches, but gold sellers are best avoided.

It’s against Blizzard Entertainment’s terms and services to sell or by Warcraft gold. A player caught buying from a gold seller may have their Warcraft account suspended, or even revoked entirely.

Gold sellers are also notorious for websites loaded with spyware, keyloggers, and viruses that can cripple a computer. All in all, it’s best to remember that World of Warcraft is a game—players ultimately get more enjoyment gold grinding themselves than paying someone else to play the game for them.

Next Post Pickups and ukulele tone – How one shapes the other

We use cookies to ensure that we give you the best experience on our website. If you continue to use this site we will assume that you are happy with it.AcceptRead more